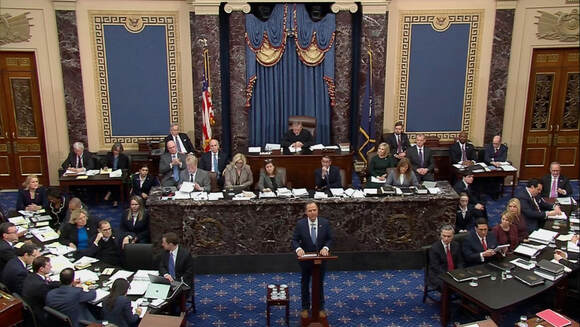 I'm not in a hurry to see Trump's impeachment trial begin.  Patience my friends, for developing clear cut evidence is an arduous process.

In order to get Senate Republicans who still give patronage to Donald Trump, to vote for conviction, there must be much more decisive evidence against Trump than what presently exists now.

Don't misunderstand what I'm saying here.  Because, although any reasonably intelligent American citizen would vote to convict Trump at this second impeachment trial, there is still not enough of those type of Senate Republicans to reach a two-thirds majority vote for Donald Trump's conviction.

I don't want to lose this second impeachment trial of Donald Trump.  I'd rather wait on his court-case for a period of even two years, and collect every bit of damaging evidence against him as is humanly possible.

For, Trump can NEVER be allowed to run for political office again.  Therefore, the accumulation of evidence against Donald Trump in this second impeachment trial must be so overwhelmingly declared, that any Senate vote to absolve Trump would be met with utter contempt and outrage from all Americans.

The outcome of this impeachment proceeding of Donald Trump is so important, there is good cause to believe that the future stability of our democracy hangs in the balance of this trial.

(1)   I don't think they will get a conviction no matter how much evidence you accrue.  They had a chance at conviction if they rushed while the events of Jan 6th were fresh in everyone's mind.  Now it has come out that the majority of Republicans actually support the actions of the insurrectionists, the Senate Republicans don't see any need to anger them.  The further we get from the day that Senators hid from Magahats with guns, the less important it will seem to do something about it.  There is no way that you can find 17 Senate Republicans that will vote to convict Trump.  It won't be good for them politically and they don't do things just because it's the right thing to do.  The best thing we can hope for now is a quick and short trial that doesn't disrupt the new administration too much.


From BChap
(2)  I get your point.  And, your view is even bolstered by the fact that there would be no appeals on a Trump conviction.  But, as it stands right now, I don't see Trump being convicted by the Senate.  We've already waited past that effective time period your post was talking about.