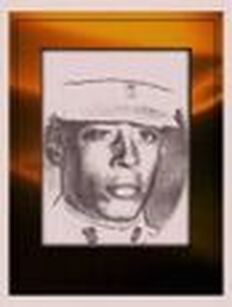 I pushed Blankenship out of the way and went into the living room on the second floor. Debbie was out in the kitchen. I was angered to no end. I told Debbie straight out, “No more games. I’m going to kill you right now with my bare hands.” Blankenship enters the kitchen and tells me, “You need to leave right now.” I said to Blankenship, “Fuck you, mother fucker!!!” I then physically attacked Blankenship, hitting him with consistent blows to his face. Blankenship then falls to the floor. I hear the faint sounds of sirens. I then hear my two friends who lived on the first floor yelling, “Brad, the fucking police are coming! Get the fuck out of here!!!” I see Blankenship lying motionless on the floor. Debbie is now on her knees trying to give assistance to him. I then kicked Debbie in the head with the boots I was wearing. She too fell to the floor and was motionless. I ran out ot the row house and escaped authorities by disappearing down various alleyways. Now, a couple of blocks away from the Gough Street residence I got on a neighborhood pay phone and called Juanita. I told my mother-in-law to go over to Debbie’s place right away and pick up Michael. I then hung the phone up.


I walked several more miles away from the Gough Street row house. I walked into this corner neighborhood bar. I began drinking triple rum and cokes. Within a half hour I was totally wasted. I then saw this fat-ass ugly redneck walk into the bar. He was big and burly. This sonofabitch was wearing a faded blue jean jacket wit the sleeves cut off. He had a big Nazi swastika sewn on the back of his jacket. I have always hated Nazis. I walked over and tapped this big redneck on his shoulder. He then turned his fat-ass ugly face towards me and said, “Whatcha want?” I said, “I’m gonna take that swastika off your jacket and shove it up your big ass!!!” He got up from the bar, turned around and slugged me in my face. He had effectively laid me out with one punch. My hair had not been cut for nearly a month. I no longer looked like a United States Marine. When the police arrived at this bar they went through my wallet and discovered my legitimate military identification. When I had come to shortly thereafter, I was placed under arrest and taken to the Baltimore City jail.


Early the following morning, a Marine staff sergeant arrived at the city jail to take custody of me. I had heard nothing about the assault and battery charges being placed on me from Debbie and Gary Blankenship. In all actuality I was glad the military authorities had custody of me. This Marine staff sergeant took me over to the Marine Reserve Center located in the town of Perry Hall where I grew up. I couldn’t believe it. As a child I used to go to this Marine station and watch them drill and dream of the day I would become a U.S. Marine. Not in my wildest dreams would I have ever expected that one day I would be escorted into this facility in handcuffs. I was placed in a holding cell awaiting the arrival of a cross-country prisoner chaser.


When I saw this puny little so-called cross-country chaser I began to laugh inside. He was a corporal, baby-faced, about 5’6”, and appeared not to be able to fight his way out of a wet paper bag. He put handcuffs on me and escorted me down to the Trailways bus station in Baltimore City. This chaser did not realize he was in my ballpark now.


I knew these bus stations like the back of my hand, especially the Baltimore and Washington terminals. We both boarded the bus. He seated me at the front of the bus, and, of course, he sat next to me. Approximately an hour later the bus arrived at the Washington, D.C. terminal. It was normal at the D.C. terminal that all passengers destined for North Carolina would transfer buses at this point of travel. We off-loaded the bus. The terminal was extremely crowded on this late afternoon. I told the chaser I was having diarrhea, in that I needed to go to the bathroom right away. He took me into the men’s restroom and took the cuffs off me. I went into the toilet stall closest to the door.


I watched through the crack of the door this chaser splashing cold water on his face at the sink. He appeared extremely tired and inexperienced in his field. But, this guy had enough energy to brag to other men in the restroom how much of a big shot he was in bringing a criminal back to where I would face justice.


There also appeared to be a good bit of traffic in the men’s restroom now. I opened the door to the stall quickly and ran for the door, pushing other men in my way to the side. The chaser was coming after me but was far behind. I then ran through a large group of people waiting to board another bus. I made it out of the Trailways property. I then went up into an alleyway and totally disappeared from my chaser. I began laughing as I now realized this chaser made the most idiotic mistake of all. He did not confiscate my personal property. “Oh, shit,” I thought, “I have well over $300.00 on me!!!” I had run for several miles until I felt I was a safe distance away. I then got a hotel room. I stayed there for the night until I felt the heat was off in the latter part of the following morning. These cops were really stupid. These authorities were out combing the streets for me while I was relaxing comfortably in my hotel room ordering room service. Check out time at the hotel was 11:00am. After checking out, I took a taxi to the Greyhound bus station. I got a bus ticket back up to Baltimore with no problems. I was laughing that I easily got my hotel room and bus ticket without being detected because I utilized my alias military identification which I kept concealed in a remote area of my wallet.


I arrived back in Baltimore via Greyhound bus at approximately 1:30pm in the afternoon. I did a direct line to Debbie’s row house at East Gough Street. I still had the key to the row house. I let myself in the house. Debbie appeared to be the only one home. We immediately got into a domestic dispute because I was laughing at the wounds my boot had inflicted on her mug. We were in the living room on the second floor. Debbie said she was calling the police. I ripped the phone cord out of the wall. Debbie then began screaming as I whispered to her that I was going to really enjoy murdering her slowly with a lot of torture. I then raised the paper curtain up and opened the window as far as I could. I thought, “Hmmm, there is cardboard here where the window should be. I then knew for sure I made a good shot from Mike’s truck !!” I then grabbed Debbie by her throat and by the back of her neck. I then began shoving Debbie out the window head first. I thought, “I’m really going to enjoy watching her hit the concrete pavement head first.” People from the neighborhood were watching down on the ground as Debbie continued to scream for help. I now heard the familiar sound of sirens. As I saw the police arriving, I pulled Debbie back in the window. I informed the two officers down on the ground that I would turn myself in to them without any problems. The police officers met me at the base of the steps. They handcuffed me and placed me in the back of their squad car. The cops were pretty cool with me. One officer said, “You know, Chap, if I was you I would give up trying to kill that woman of yours in such a dramatic fashion. Off the record, if you’re determined to kill her, why don’t you just do it the American way…shoot her?!!!” Surprisingly, the officers informed me they were taking me straight to the Marine Reserve Center and not to the city jail. I was relieved. But, I was still confused as to why there was no arrest warrant out on me for the assault and battery of Debbie and Gary Blankenship.


This time a real Marine cross-country prisoner chaser arrived. This Marine sergeant was big, mean and nasty. He was packing heat, too! I could tell right from the start this was going to be the longest trip of my life. This boy didn’t play. I kept my mouth shut and did exactly what he told me to do, when he told me to do it. Besides business, he never spoke a word to me the entire trip back to Camp Lejeune, North Carolina. He then delivered me to the base brig.


I had been a disciplinary problem to the Marine Corps pretty much all the time I had been on active duty in some form, shape or another. But, this time it was real serious. I was pending a bad conduct discharge, reduction to a private (E-1), six months in the brig and forfeiture of all pay and allowances. I had requested mast to the commanding general of Camp Lejeune. I had major tears coming down my face. The last thing I wanted was this bad conduct discharge. I pleaded and begged the general to give me one more chance. The general was resistant to my request and told his aid to get me out of his office. While I was being dragged out forcefully, I was yelling, “No! No! Please, sir! PLEASE!!!” As I’m being taken down the corridor I hear the general yell, “Hold up a minute!” The general approaches me and states very angrily, “I’ll tell you what! Okay, Marine. I’ll give your ass one more chance. But, if you fuck up in any way, your ass is finished!!!” In the next several days I was released from the brig and sent back to my unit. I went from private to sergeant in sixteen months with these all being meritorious promotions. I made John Wayne look like a slacker.​

Continue On To Page Seven
​www.bradleychapline.com/injustice-for-the-sake-of-justicepg7.html