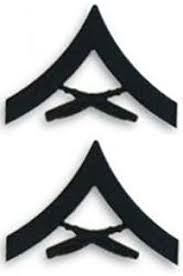 After reading "Just For The One Star", I began to do some thinking about some aspects that seemed to promote more questions than explanations to me.  I learned some things that were new to me.

I was aware that my husband had been acquainted with Corporal Vicki Stone prior to meeting me.  This was not unusual to me.  He had been in the Marine Corps for many years and had been in numerous duty stations.  However, I had not been aware that Vicki had been a part of the brain trust behind the preparation of the Competition Squad for the winning of the gold medal.  She was apparently an exceptionally indispensable member of this mission, though her role as "silent" partner precluded her from any sort of reward for her efforts.

​Not related in this narrative is how much Vicki had enjoyed her post in Washington, D.C. and the fact that due to an allegation of sexual harassment placed by Vicki against an influential person, she had not left there willingly.  Nor, was she likely to have ever been welcomed back.  This also relates, perhaps, to the reason she was not transferred to Camp Smith in Hawaii.  This installation saw many gatherings of influential service members and government officials.  It is not unlikely that her name would have sent up warning signals to those stationed there or passing through.

At the time, many more things were going on in our lives, mainly concerning the high profile prisoner, Charles Chitat Ng, who my husband finally delivered to the prison at Fort Leavenworth.  These events would have resounding repercussions in our lives for years to come.  It is an understatement to say that since nothing had affected Brad as far as the Competition Squad, we were more preoccupied with the situations resulting in our current and future plans.

After all these years, approximately 37 or 38, I viewed this time with a new perspective.  So I looked at the true result of the cheating scandal investigation.  Who was affected?  Who was not?  What made sense?  What did not?

I thought that it was strange that neither my husband, nor his contact in Washington, D.C. were sanctioned in any manner for their part in the cheating scandal.  Brad was told he was not a "significant player" in the activities, but, the original idea had been his.  True, without Vicki the plan would not likely have been brought to fruition, but the actual paperwork detailing the areas to be tested had still gone from his contact to him and been implemented directly by him.

This said to me that some approximate two (2) years after winning the gold medal, there had been no physical evidence of the exchange of information.  If it had existed, surely some punishment would have been exacted.  Instead, my husband received a high reenlistment code and an imminent promotion to the ranks of staff non-commissioned officer.

And yet, Captain Pfeifer lost his commission, was discharged from the United States Marine Corps under "other than honorable" conditions.  The Commanding General of Kaneohe Bay, Brigadier General Thomas McMillian was, in essence, forced to retire.  And Corporal Stone...she just disappeared.

In order to mete out the punishments to Captain Pfeifer and General McMillian, something more than suspicions would have to be required.  As mentioned, if there had been any physical evidence, there is no reason why both my husband and his contact would not have received sanctions of some sort.

Therefore, the only other leverage which could have been used was an actual statement, or affidavit from a certifiably credible source.  A statement by a witness is often tempered by stipulations and concessions.  In a prosecution, for example, immunity may be granted to an accomplice in exchange for testimony which will convict a more major target.  I believe this is what happened.

Corporal Vicki Stone had a grudge against both Captain Pfeifer and General McMillian.  She believed she should have been rewarded for her work in bringing the gold medal to the Kaneohe MCAS.  She wanted to work at Camp Smith.  Mingling with high ranking military and civilian personnel was her milieu, the place she felt she belonged.  She undoubtedly felt Captain Pfeifer "owed" her for her work and resented that he had been promoted and assigned to Camp Smith while she was not even being considered for transfer to a position there.

Vicki was not treated well when she went up to work for the general.  No one wanted her there and it was not hidden from her.  She most likely felt the General should have shown his gratitude towards her for her part in helping the Competition Squad, but he may not have known anything about it until, or unless, it would have been confirmed by Captain Pfeifer when Brad brought her up to take his place as the General's Secretary.

The fact that Brad had apologized to her and attempted to get her to be his replacement is most likely what prevented him from being named as having any importance in the scandal.  She did not have a grudge against Brad or his contact in Washington, D.C.

She, herself, disappeared.  Brad tried to contact her but her quarters in base housing were deserted.  They had not been cleaned up...an unusual occurence.  He was unable to locate her through the internet in years to come.  We were at Kaneohe MCAS for nearly a year after she was gone.  No apparent effort on her part to contact Brad was ever made.

I believe it is likely that she "got even" with those she felt had wronged her by contacting NIS (Naval Investigative Service)  and by offering sworn, but limited, testimony against Captain Pfeifer and General McMillian.  Her background and contacts regarding Washington, D.C. were well documented and would certainly be believable.  She probably affirmed that she was the source of the information and that Brad, like the drill instructors, only followed orders and did not have anything critical to do with the theft of the information.  She got along with Brad.  He had tried to help her.  And she bore no ill will to his contact back East.

I cannot prove any of this.  It is all supposition.  But it answers the basic questions for me as no other theory can.  It is an interesting puzzle.  Certainly something to think about on a quiet evening.