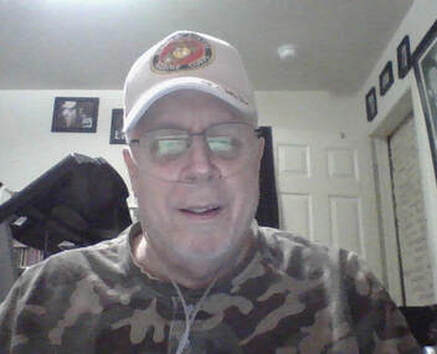 "Working hard for every breathe used to be just a saying.  Now, it is a reality."
>B. Chapline<
THE MODERNA VACCINATION SHOTS
AND
STAGE FOUR COPD
February 2021


I have to give credit and my wholehearted thanks to the Southwest Medical clinic in my hometown. Their corona-virus inoculation operation was efficient, structured, and safe.


I must say, that due to my stage four COPD condition, I initially didn't think it was wise for me to take these two moderna shots.
When I compared the advertised side effects of this two-part vaccination to my present day COPD condition, my common sense told me that this would certainly be a "high risk" undertaking.


In my past, I had two careers. A U.S. Marine and a State Peace Officer. No doubt, both occupations, throughout many decades, provided me with an extremely high likelihood, at some point, of being exposed with some type of virus and or contagion. For, I lived and worked in virtual factories of pestilence.


But, I survived it all. And, I did so by properly wearing medical protective gear.


On the other hand, my past history with vaccinations gave me, not only frequent medical problems, but, as well, had threatened my life on two occasions.


So, long before the arrival of this corona-virus pandemic, in protecting my compromised lungs, I had been wearing protective masks, gloves, and carrying hand sanitizer whenever out in the public sector. Never once did my protective ensemble let me down. I didn't even have so much as a sniffle in all those years.


So, I had good reason to pass on the corona-virus vaccinations.


Now, even though my spouse wanted the moderna vaccinations, the constant media coverage of mass chaos and confusion at these vaccination centers were enough to give anyone serious concerns.


So, for myself personally, I went against my better judgment and decided to go with my better half and take the vaccinations with her.
The first moderna shot was an absolute breeze at the vaccination center. It was nothing like what the media was reporting. The side effects of this initial shot were so mild that I had only minor stiffness at the point of vaccination.. Simple. Right?


Twenty-eight days later the vaccination center was still as organized as it was on my first visit. But, the nurse who would administer my second moderna shot saw that I was on oxygen therapy.


Appropriately, she cautioned me on just how strenuous the side effects of this second moderna shot could be. Severe headaches, fever, shortness of breath, along with a host of other possibilities. Standing beside my spouse, we both took the inoculation.


It didn't take long for the harsh realities of this second dose's side effects to grab me, and take me down. I not only had a fever, but the aches and pains over most of my body were excruciating. I now had maximum pulse rates of over one hundred twenty. My blood pressure had also skyrocketed to dangerous proportions.


But, worst of all, I could hardly breathe. I was now scorning myself for having taken the high risk of this moderna vaccination.
For the next twenty four hours I fought off horrific pain in my chest and forced myself to do hundreds of breathing exercises. I decided I wasn't going to die without a fight.


Finally, hours later, I went to sleep. In an unusual kind of way, this moment was relaxing. I figured if and when I would wake up, I'd likely be over with all the moderna side effects. And, if during my sleep, I had passed on, at least it would have been peaceful for me.


Seven hours later I awakened. For being a stage four COPD patient, I felt great. In fact, much better than before taking the vaccinations.
I don't know why this was so, but I'll certainly appreciate the time given to me to feel this good.

​MY COPD PROTECTIVE GEAR
Before And During The Pandemic
Nov 2020
​

I surely have never forgotten all the periodic harassment and discrimination I received prior to the corona-virus pandemic taking hold.

​
People just assumed, since I was wearing a mask and gloves, I was infected with some kind of a bacterium. Nothing could have been further from the truth.


And, all this because I am a long term COPD stage four patient on 24/7 oxygen therapy who was only doing his best to protect his weakened lungs / immune system.


In the winter of 2016, when I did not wear protective gear, I caught the "flu bug" and was hospitalized. It was both a dangerous and quite horrible experience.


In the aftermath, I sat back and thought where I could have possibly contracted the flu bug. Because, I seldom go out in public, and only do so when necessary.


The answer was clear. The grocery store. Scores of people openly coughing and sneezing, pumping out all kinds of germs into a closed indoor area. Simply put, a "breeding ground" for contagions to explode.


More than ever before, I would dread going out into the public sector. But, when I had no choice, but to venture out, I developed what I called a "COPD Uniform". Wearing a mask and medical gloves, along with carrying hand sanitizer gave me a measure of comfort and safety.


So, when the corona-virus pandemic hit, I knew many people across America would reject wearing protective gear and virtually become "super-germ-spreaders".


While my heart goes out to the elderly, for example, who are innocent and defenseless in being infected, I have, on the other hand, absolutely no sympathy for those who became sick because of ignorance and or negligence.


This may sound cold hearted, but, in some ways this pandemic is good for me. For instance, during community lock downs, seniors and the disabled have their own shopping hours. The streets are close to being empty. On just these two elements alone, my safety factor has skyrocketed.

​
Now, I have added an extra layer of protection. While I still wear a mask and gloves, I'm now wearing a plexi-glass face shield. My fears of being infected are now at the lowest level that I can ever recall in my years with COPD.


While many people place no reliance in protective gear, I, on the other hand, am living proof that masks, gloves and shields do work. Since my hospitalization for the flu in 2016, I haven't had even as much as a sniffle since that time.


Be safe, protect yourself, and breathe and live as comfortably as possible.
Return To Main Page
www.bradleychapline.com/