Making It Thru Marine Corps Boot Camp
(The Hard Way) 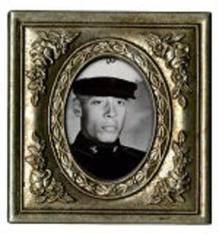 It was July of 1972.  I was glad to have left behind my turbulent and troubled childhood as I was being transported to the world's most difficult "Boot Camp", the  Marine Corps Recruit Depot, Parris Island, South Carolina.  I wanted that fresh new start in life.  But, unknown to me, the drill instructors of platoon 373 knew I was coming.  And, they knew everything about me.  And were they prepared.  I feared my drill instructors more than any other person ever.  I was going to do my best not to bring any personal light on myself.  Short lived.  Right after getting my head shaved, I took an academic test to determine my intelligence level.  I was graded as a low category four.   The lowest of all the low scores.

Back at the barracks, of course, I was made a spectacle of by the DI's.  I endured my first severe personal thrashing.  The next morning, at breakfast in the chow hall, I was sitting at attention, eating in the structured manner that we were taught.  One recruit in particular was making fun of my damaged right eye that I had been dealing with ever since elementary school.

In anger, I stood up and smashed the aluminum food tray into the side of this recruit's head.  I was immediately shipped off to Parris Island's one day disciplinary motivation camp.  It was grueling and humiliating.  But, I survived, and returned back to my platoon.  Several weeks later, after a severe asswhipping at the hands of my drill instructor, I was shipped back out to the three day disciplinary motivation camp.  I had got caught leaving my rifle unlocked on the back of my bunk.

I never thought I could possibly survive this.  I felt at the time this was akin to a WWII Japanese concentration camp.  I expected to be kicked out of my platoon, and set back in training.  It didn't happen.  My senior drill instructor brought me back.  Another three weeks passed.  My other two drill instructor's wanted me washed out of boot camp.  I refused to submit.

I took the best, physically and mentally, that these two junior drill instructors could dish out to me.  But, I had not won, for I began sleepwalking and was found, one night after taps, outside the barracks, by the military police, walking down the side of the street in my skivvies.

I was then sent to the seven day disciplinary motivation camp.  Now I was assured that I would be kicked out of my platoon,  and most probably the Marine Corps.

Very few recruits ever survive the seven day disciplinary motivation camp.  But, I had good reason to believe that recruits who do survive, have to begin boot camp all over again.  I was on my last thread, but nearing the end of the seven days of pure hell.  I was called back to my platoon.

My senior drill instructor ordered me to get cleaned up, and report to the base hospital.  There, upon my arrival was a team of psychologists waiting on me.  They immediately saw an array of cuts, contusions and bruises on my face.

I was then ordered to strip my uniform off.  The on-duty physicians identified an array of bruises on my chest, back and legs.  My feet were still, at this moment, bleeding.

After receiving medical treatment, behind closed doors, I was offered a medical discharge.  I would only have to write a statement against my drill instructors.  I refused.

Finally, I was released back to my platoon.  I was not being set back!

A couple of weeks later at graduation my senior drill instructor talked to my father.  He stated, "Mr. Chapline, your son has the capabilities of becoming a very good Marine.  However, it will be a rough, rigid road for him getting there.  I've never seen any recruit withstand the huge amounts of discipline that your son endured.  Be assured, Mr. Chapline, I kept a watchful eye on your son to make sure that we didn't lose him.  I believe your son can accomplish anything, even against overwhelming odds.  We did our job here at Parris Island.  We merely prepared your son mentally and physically for all the times in his future that he must fight battles where the odds are not in his favor."

Now, in closing, I'll say directly on the record that, "I'm always proud to have been a United States Marine.  But, I'm not in any way comfortable with the many fakes and frauds who have somehow made their way past boot camp and entered our ranks, especially in leadership roles.  Whether or not it was the nature of many Drill Instructors to inflict outright brutality and torture on their fellow Marines, who were defenseless recruits, these types of individuals have severely stained forever, not only my heart, but also the once greatest fighting organization in the world; The United States Marine Corps."  >B. Chapline<