Reckless Americans
In A
Global Pandemic 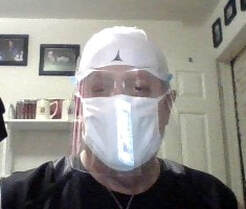 In 2001 as a state peace officer, I got a work related toxic smoke inhalation.  In a nutshell, a building was on fire and people were trapped.  There was no fire safety equipment available, and the fire department's response time was still some distance away from the scene of the fire.

I had to make a choice.  Simply speaking, there was two options:  (1)  Put myself at high risk and evacuate the people inside, or (2) leave them stranded in the building to choke or die.

For me, the decision was easy to make.  I began depopulating the burning building, expeditiously.  In the end, my lungs had been poisoned with toxic smoke.  In 2003, a team of pulmonologists agreed that the severity of the inhalation was such that I would not live past the year 2007.  The poison was likened to glue on my lungs.

But, I have grappled, hard, for nearly two decades just to keep breathing.  One of the ways I have protected my compromised lungs has been to wear a surgical mask and examination gloves whenever I leave my protected safety zone at home.  I know firsthand that this has been, and still is, a very effective deterrent in staying clean from viruses.

But, prior to this corona virus pandemic, the harassment I have endured just over protecting myself has been immense.  Many people just assumed, when I'm in public, I have a contagious disease.

But, it hasn't been me.  For the most part, the infected individuals were the same people who were ridiculing me for wearing protective gear.  For example, in the midst of influenza epidemics, these same people who refused to wear masks were the ones in public domains, such as grocery stores, who were openly hacking and coughing.  They were, in fact, the super-spreaders of bacterium's.

Nothing has changed from then to today's pandemic.  The bottom line is, wear protective gear, and follow CDC guidelines.  Just don't ever forget to suit-up and protect yourselves from the many "Reckless Americans" of our society.
Return To Main Page
www.bradleychapline.com/