The Trump Threat To America Lingers 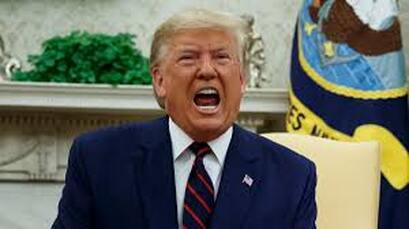 I really wanted my retirement years to be quiet, peaceful and uneventful.  I had some mighty hard years as both a career U.S. Marine and a State Peace Officer.  But, I knew from the beginning, in 2016, when Donald Trump was inaugurated as President, deep trouble would be looming for us as a nation.

Now, what set me apart from others in the rank and file of military and law enforcement was my unprejudiced and forbearing styles of leadership.  Definitely, not a universally accepted trait in either field.

However, in the military and law enforcement fields, I can understand some forms of peremptory leadership.  For superintendence over subordinates must provide clear expectations of what needs to be done, when it should be done, and how it should be done.

But, there is no room for any type of autarch in American politics.  For, "We The People" are a free country who live in a land of laws.

However, once again, there is no doubt obedience and subjection is needed in both the military and law enforcement fields.  But, when it comes to electing the political leaders in our country, there are no excuses for the troops in either organization having trouble separating life in uniform and living as a civilian.

But, there are definitely other significant voting blocs here in America that descended towards Donald Trump in the 2020 presidential election.

A significant percentage, for example, are white Christian Conservatives of whom many take hard line views on their beliefs of an "American Identity" in a closed culture.

And then, there are the most extreme threats to our democracy.  There are approximately two hundred active white supremacist organizations in America.  Most of whom strongly support and are very loyal to President Donald Trump.

Remember, the Trump forces numbered in the range of 71 million Americans that voted for him.

The election for President in 2020 is over.  The "Trump Threat" to America is not.
Return To Main Page
www.bradleychapline.com/